Yesterday, Wednesday 23 May (Lorna’s brother’s birthday) we had a spiritual retreat for the staff.  This is the second one we have had since we have been here.  The first was in December and it was for 1/2 day.  The staff enjoyed it so much, they ask for another and they ask if it could be a full day.  So, we planned the day to last from 9-4.  BUT, we still had so much material that it lasted until about 5.

The focus of the retreat was prayer.   With the help of our volunteers, we made a new bulletin board with prayer scriptures and praying hands.   You cannot tell in the picture but on the orange hands the Lord’s Prayer is in English.  On the yellow hands it is in Solozi (the local language).  On the sides is “Pray without ceasing” in both languages.  There are several other “prayer scriptures” that are in the center. 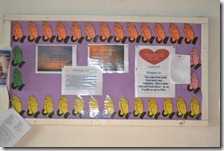 We started our day in prayer and with singing.  Then we had a video of Lorna saying the Lord’s Prayer line by line and our 2 year old, repeating line by line.  It was SO CUTE!!!  She really stayed with it and did well.  She was in her pajamas so that made it even more cute!  Then we did a team building activity where they were blindfolded and ended up with a prayer partner at the end of the game.  By mid morning we were ready for our guest speaker.  He is from the community and he gave a powerful talk!! 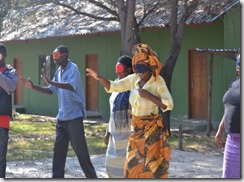 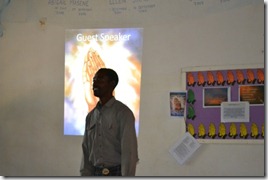 We all worked hard ahead of this day to prepare the food for lunch.  Baking, mixing, chopping… gave us a nice lunch along with a special treat of chicken from the shop in town called “Hungry Lion”.  Everyone was thrilled and, yum, we were thankful and satisfied for the afternoon.

After lunch we had more songs and the guest speaker continued his talk.  Then we had a fun game where the partners were given a balloon.  They had to pop it without using their hands or teeth.  Once popped they got a scripture on a small paper that was inside the balloon and they had to find the scripture in the Bible and be ready to read.  Pop!!  Pop!!!  The winners were 2 of the smallest in the room!  Their scripture verse was       Philippians 4 6-7 Do not worry about anything, but in everything by prayer and supplication with thanksgiving let your requests be made known to God.  And the peace of God, which surpasses all understanding, will guard your hearts and your minds in Christ Jesus.  We also did a team building activity where they had to carry a cup of water on a handkerchief without spilling the water.  The course was tough but both teams made it without spilling the cup. 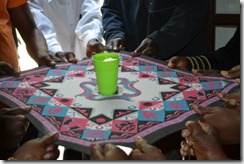 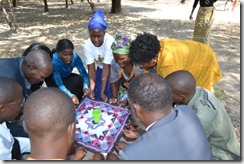 We then did a craft out of medical gloves where we blew them up, tied them with yarn and wrote on each finger to remind us how to pray and what to pray.  Then they took their praying hands with them to prayer tables.  There were four prayer tables: world, community, family and Children of Zion.  We gave them ideas on what to pray for in these “categories.”  They ended by praying with their prayer partner that they got earlier in the day.

We ended with Amazing Grace as a song.  Then we all held hands and said the Lord’s Prayer in our own mother tongue.  AWESOME!!!!

GOD was in the day!!  God prepared the way for the day.  And we pray that everyone walked away changed and will continue to have prayer and GOD as a priority in their lives.

We thank our volunteers that helped to prepare for the day and also took care of the little ones so that all staff could participate.  We thank the staff that helped to make food the day before.  We are thankful for each other and know that God has brought us together to be a team.   Most of all, we thank GOD who prepares hearts and changes lives.

Jesus said, “I tell you, whatever you ask for in prayer, believe that you have received it, and it will be yours.”  Mark 11:24

Posted by tlcinhisservice at 1:17 PM No comments:

“I pray also that the eyes of your heart may be enlightened in order that you many know the hope to which He has called you...” Ephesians 1:18

In Africa, and in Katima, for us, there is not a day that we would call “just another day.” Everyday has something new, some kind of challenge, some kind of change requiring flexibility, something breaking, many blessings, beautiful sunsets, smiling children, crying children, sickness, healing, song, visitors, singing and dancing, sand blowing, a variety of animals, sick animals, water rising, the road offering a challenging journey, spiders and bugs, someone knocking at our door at any time of day and night, many prayers and HOPE, the HOPE that only GOD offers and Brings. 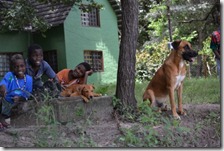 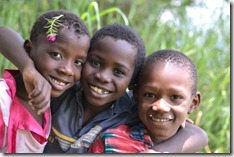 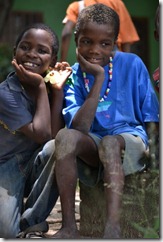 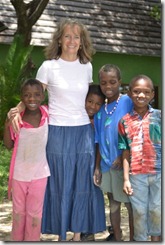 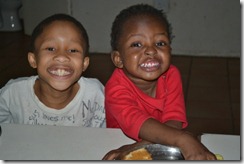 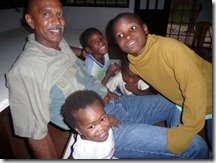 “See, I placed before you an open door that no one can shut.”  Revelation 3:8

Posted by tlcinhisservice at 12:54 PM No comments:

Here in Namibia, the children have 2 long holidays (one month each) and one short (2 weeks).  Otherwise, they are in school all year except for national holidays here and there.  The first long holiday of the year begins the end of April.  It lasts for one month and signifies the end of the first school term.  So, this means that we pick up the children from the 4 secondary schools and bring them back to Zion. For the primary school here at Zion, we lead the end of school devotion, give an encouragement speech and handing out the school reports.  Thanks to the MTC donation, our children are sporting smart looking school sweaters to go with their uniforms.  This is perfect timing as winter and cool mornings are coming. 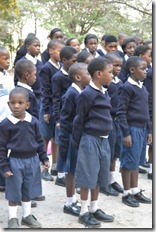 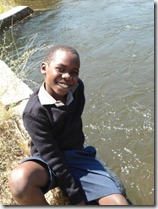 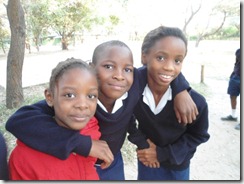 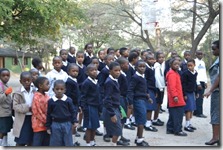 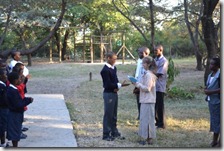 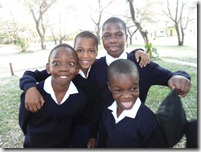 We are very proud of the children this year.  They did very well in school.  For about 15 of them, it was their first time schooling outside of Zion.  Only one had difficulty but the rest passed with very good grades and were very excited!  Here are just a few. 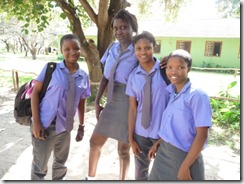 Since, then, you have been raised with Christ, set your hearts on things above, where Christ is seated at the right hand of God.  Colossians 3:1

Posted by tlcinhisservice at 12:19 PM No comments: