We have been in a whirl wind but God has kept us on our feet!!!

As you might have read in our newsletter, we have officially quit our jobs the end of June. We have also moved everything out of our house. It was kind of weird to have truck after truck come and haul our stuff to be donations, away. We have stored some sentimental stuff as well as a few basics. Our house is empty except the stuff we are taking to Africa which is in one room.
Lorna completed the Iron Girl Triathlon with some of her friends from Children's Healthcare of Atlanta on June 27th. The finish line had more than one meaning this time. (See article in newsletter link on our website http://www.tlcinhisservice.org/). 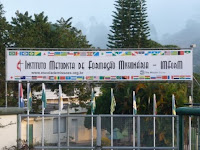 We left July 1 for Brazil where we spent about 3 weeks of cross cultural training in the mountains of Rio at INFORM.
We had a true cross cultural experience as we studied next to our
new Brazilan friends. The teaching was sometimes in English and sometimes in Portuguese. There was always a translator.
At meal and break times we tried to communicate as best we could and we did learn a little (very little) of the language. 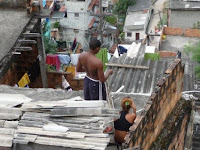 s (favelas or slums) in the city. That was truly an eye opening experience. 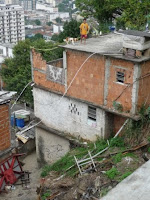 The homes are build on the sides of the

mountains and it becomes a totally concrete

wall. They build on top of each other and the homes go straight up the mountain with hundreds of stairs to get up and down. The kids just run up and down and hardly ever fall. We were walking very carefully step by step. The kids and dogs were on the roofs if there was not a house on top of the roof. The pictures do not even show the situation. We went in as learners to try to observe how the people live, what is important to them, and what are their hopes and dreams.
Many were armed with weapons, many worshiped spirits, many needed jobs, and only some had and knew the love of Christ. 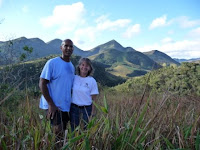 also had fun times.
Some of us opted to hike one afternoon. We went straight up (and I mean straight up) the 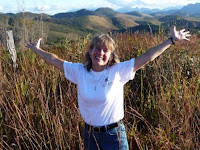 mountain. The "grass" was as tall as me so there were several challenges. The view at the top was worth it all. I wanted to sing "The Hills Are Alive"!!!!

One afternoon we shot off bottle rockets. They were great and everyone had a blast.

We also saw a few movies in the evening. They were great movies and the purpose was for us to practice what we learned about being incarnational and cross cultural experiences. We watched "The Gods Must Be Crazy", "The Terminal", and "Avatar".

Each morning we woke to fog, which lifted later in the morning and then often settled back in later in the afternoon. It was a beautiful place. The Holy Spirit was clearly present. 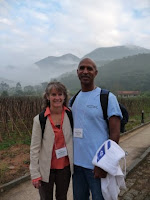 I have to say that I was "chilly" most of the time. I layered as much as I could but was wishing I had my fleece! There was no heat in the buildings and one morning we could see our breath in the classroom. We learned to open the windows to our room during the day and shut them before the sun went down and then when we came in at night, it was actually rather warm. Here is a picture in the morning fog and also one of the inside of our room. We washed our clothes in the 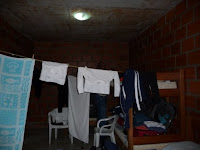 sink and hung them on a line that we took.
We learned the they would not dry in our
room so we found a place outside to hang
the line. That worked much better. 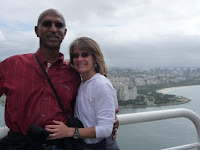 We left the campus on July 17th to drive into Rio for some tourist time. Our first stop was the hotel for the night and the next day we went up Sugarloaf mountain. 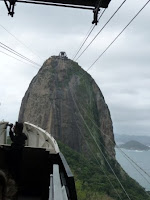 We rode
the tram to get there and the view on the right is from the top. It was a cloudy day but at least it was not raining as it did the day before when we traveled.

After a BIG Brazilian lunch, we headed for
Christ Redeemer. We rode the train up the mountain to see this huge statue. 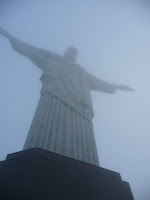 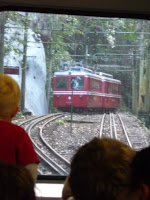 It was quite a sight even in the fog.
We headed for the airport in the evening to catch our 10:20pm flight back to Atlanta.
Travis and I said our goodbyes to our mission friends at the airport and checked in for our next flight to Colorado Springs.
We are now safely in CS and just finished our first week of Language Acquisition class (how to learn a new language). We got in Monday afternoon and had our first class the same day at 4:00. We have adjusted to the time but our brains are a bit stretched. We are glad to have the weekend free except for 2 assignments that are due next week.
We are grateful to all of our friends who are praying for us. We could not keep up this pace without your prayers and God's Love and Grace. We continue to be Blessed.
We do miss our families and our friends and have even come to the realization that we no longer have a home in the states to go back to. We can only look forward to our new home in Africa.
God is preparing the way before us and we are being obedient to His call!
Posted by tlcinhisservice at 7:29 PM