National Day of Prayer called by the President of Namibia

But I tell you: Love your enemies and pray for those who persecute you.  Matthew 5:44

On March 6th the President of Namibia called the first National Day of Prayer for the country of Namibia.  The focus was on battered women and children.  The shops in town were still open but the bars were all closed and if someone was caught drinking they would be fined N$5000 (or about $500 US).

Schools were still open so we decided to pull everyone, including the school children, together.  So the adults formed a circle of benches to sit on around the children, who sat on the floor in the children’s home.  We opened with the National Anthem and some songs and the pledges and prayer. 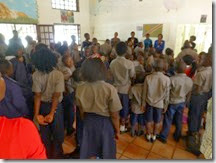 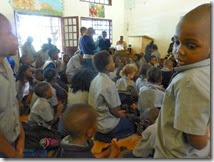 Then there was a program talking about the matters at hand – abused women and children.  Scripture was read and talking and praying points were spoken.  Then, adults were either appointed or volunteers to pray on certain specific topics that were discussed.  Then children could also volunteer.  We have to say that these were some of the most sincere prayers we have heard from the children.  They were really listening and knew what was going on and the prayers were so on topic.  We really know that at such a young age we could have prayed such a prayer.

The day was Glorifying to God and it was so peaceful and refreshing and we were thanking God that there is a president that would call a day of prayer for the country.  We are also thankful that we have a Christian school and can freely pray and worship!!!  What a Blessing!!!

Therefore I tell you, whatever you ask for in prayer, believe that you have received it, and it will be yours.  Mark 11:24

Through Christ I have authority over the devil.  What a mighty God we serve!

Posted by tlcinhisservice at 5:47 AM