Well it has been a tough couple of days here for scarlet (the dog).  She went into labor Saturday night and the first puppy got stuck.  So, she worked and worked for we don’t know how many hours but by morning she was exhausted and she did not even have the first puppy pushed through.  To make a long story short, we worked with her the whole day but we had to call the vet because she was just too tired to deliver.  Out of 6 puppies only one was alive.  There are still more puppies in her and it is Monday night.  Too much time has passed so, we must take her for surgery to get the rest of them out tomorrow.  Poor Scarlet.  So much milk and so much work and only one puppy to show. 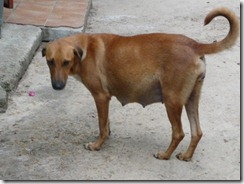 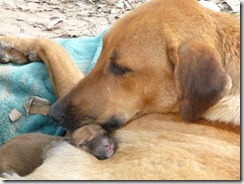 She made a nice home under the top of the car that was laying on the ground.   At one point we had to use it as the surgery table.  So was NOT so happy about that but we put her back in the hole she dug and put her roof back on.  It was good there was a roof because it rained today and they were cold. 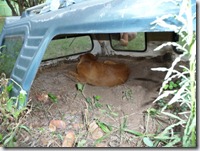 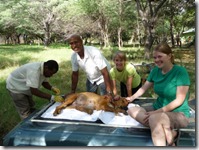 Prayers for Scarlet and the puppy please.

UPDATE!  Since I could not get this to post on Monday when I wrote it there is an update.  Scarlet delivered two more puppies on her own (well with some help here but not from surgery).  One, a girl, alive and one dead.  That was Monday night and Tuesday morning.

Last night (Tuesday) she had another dead puppy.  Not sure if there is one more or not.  Scarlet is not looking so good now and she is not eating.  The 2 puppies seem to be doing well but we have to carry them to Scarlet because today she is not going to them.  What’s next????  Not sure….  One day at a time, one hour at a time, one moment at a time.

Posted by tlcinhisservice at 1:41 AM