Africa Day is the annual commemoration on May 25 of the 1963 founding of the Organization of African Unity (OAU). On this day, leaders of 30 of the 32 independent African states signed a founding charter in Addis Ababa, Ethiopia.[1] In 1991, the OAU established the African Economic Community, and in 2002 the OAU established its own successor, the African Union. However, the name and date of Africa Day has been retained as a celebration of African unity.[2] 2012's theme of Africa Day is "Africa and the Diaspora." It should also be noted that Africa Day is observed as a public holiday in only five African countries, that is, Ghana ,[3] Mali, Namibia, Zambia and Zimbabwe.
The theme of the 2013 Africa Day is ‘Investing for Sustainable Success’. Following on from last year’s theme of ‘Taking Ownership’, we aim to explore what is being done in Africa to ensure that success is not only achieved but also sustained.
Well, we heard there were going to be celebrations at the stadium in town so we thought it would be good to take the children to see and to learn.  So, we loaded 2 cars and 22 children and off we went.  When we arrived at the stadium they were playing soccer and net ball.  OK, so maybe there will be sports for a while then speeches, singing, dancing…  Well, not so much.  There was ONLY sports!!  So, we watched sports for a while then took our 22 and walked through town to the market.  Everyone was handed a N$1 to choose either a banana, roll, or lollipop.  So, they enjoyed the opportunity to choose and pay for their purchase. 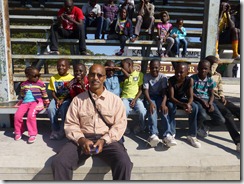 Then we bought them some juice and handed out jiggies that we brought along.  Back to the stadium.  Still, just sports.  But, there was a court space now open and the boys brought the basket ball, so they all played for a while then we loaded by about 1:30 to come back to the village.  A bit disappointing but none-the-less, it was a fun outing with the children. 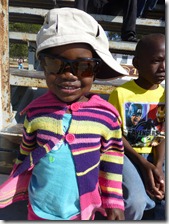 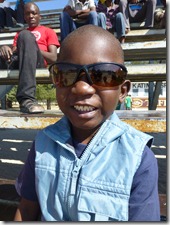 Posted by tlcinhisservice at 7:06 AM