On 21 May 2013 the schools in Namibia opened for the second term. School here starts in January and goes for the whole calendar year with 3 major breaks – one month mid-April to mid-May (now), 2 weeks in August and one month from mid-Dec to mid-January.  Unlike the states, we are starting winter now.  It is not yet really COLD, but the mornings and nights are chilly. 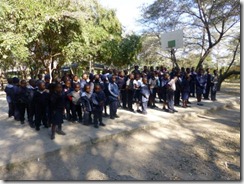 The day starts with some cleaning at the school and around the school.  Then they organize for assembly.  There is assembly and devotions every Monday of the school year, but each opening and closing day of the school term opens or closes with the “directors” leading the devotion.  So, after some singing, Travis led the opening devotion.  We then accepted prayer requests and praises and had prayer time.  The assembly was closes with saying the pledges and singing of the national anthem.  It was a nice start to the day and the second school term at Zion Mission School. 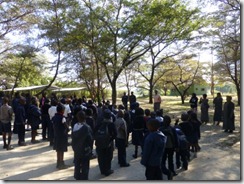 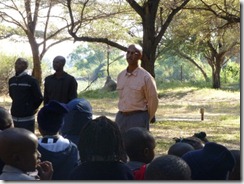 Train up a child in the way he should go, and when he is old he will not depart from it.  Proverbs 22:6

Posted by tlcinhisservice at 6:39 AM